Unique Single Tokenized Edition of my Original Oil Painting on Canvas, 30 cm x 40 cm (approx. 12" x 16"), 2016. Unlockable 3560 x 4739 high resolution image available to purchaser, to really dig into all the details of the work. --Description of the painting's narrative: "In this small work, there are 4 identities; Mr. Crazy Bones on the right, Ms. Alien Head to the left, Atmospheric Chakra Monster up top, and in the mid background is Mr. Crazy Bone’s own ego. Ms. Alien Head is startled that the shaman Mr. Crazy Bones has spotted her despite the typical glamour apparatus which usually subverts the attention of her abductees. Mr. Crazy Bones, having a long history with greys through disciplined dreaming practice, uses his powerful awareness to detect her form out of the cloud of orb and bubble like camouflage. The gender of Ms. Alien head, of course, is only a device, beckoning a memory in the shaman of his childhood playing Ms. Pacman in the arcade. This alien head is the type that behaves in the dream space much like a balloon–inflatable, buoyant, and in this case budding out a second baby alien head. In a rare turn of events, Mr. Crazy Bones has managed to do the impossible, distracting Ms. Alien Head! In his right hand he has brought a Poke-Ball, which he will use to catch the sneaky bastard. Part of the method employed by the shaman to trick the alien is by losing his human form almost entirely. He still retains hands and an essential skull like head, though it has begun to grow grasshopper legs in back, which, in a cricket like manner, are preparing to produce a sound by rubbing against a long mono-antenna. A large red object appears where the hind brain would be. The function or nature of the object is unclear; is it a tumor, a sinus, an organ? Much like the head, Mr Crazy Bone’s body has begun to differentiate. Though he still has human hands, he now sports a multitude of arthropod inspired legs, a shell on his back encrusted with various hard and gem like textures, and multi hued rubber tubes cycling in and out of his body, serving as a liquid coolant based upon the technology of PC Gaming Rigs. Meanwhile, Atmospheric Chakra Monster is engaging with the deeply unconscious layer space of the entire scene. Its projections include soft, fleshy iterations as well as hard shark tooth /claw iterations. One of the hard projections pierces its own body, indicating a self intersecting, recursive nature. Mr. Crazy Bones, though focused on Ms. Alien Head, is beginning to reciprocate some of the harder toothy forms of Atmospheric Chakra Monster. The shaman’s head instinctively begins to disassemble into finer filaments as a means to perceive the unconscious entity. In the background, a faint ego of the Shaman focuses in parallel on the alien. The pivotal question in this moment: Will Mr. Crazy Bones succeed in turning the alien into the abductee?" 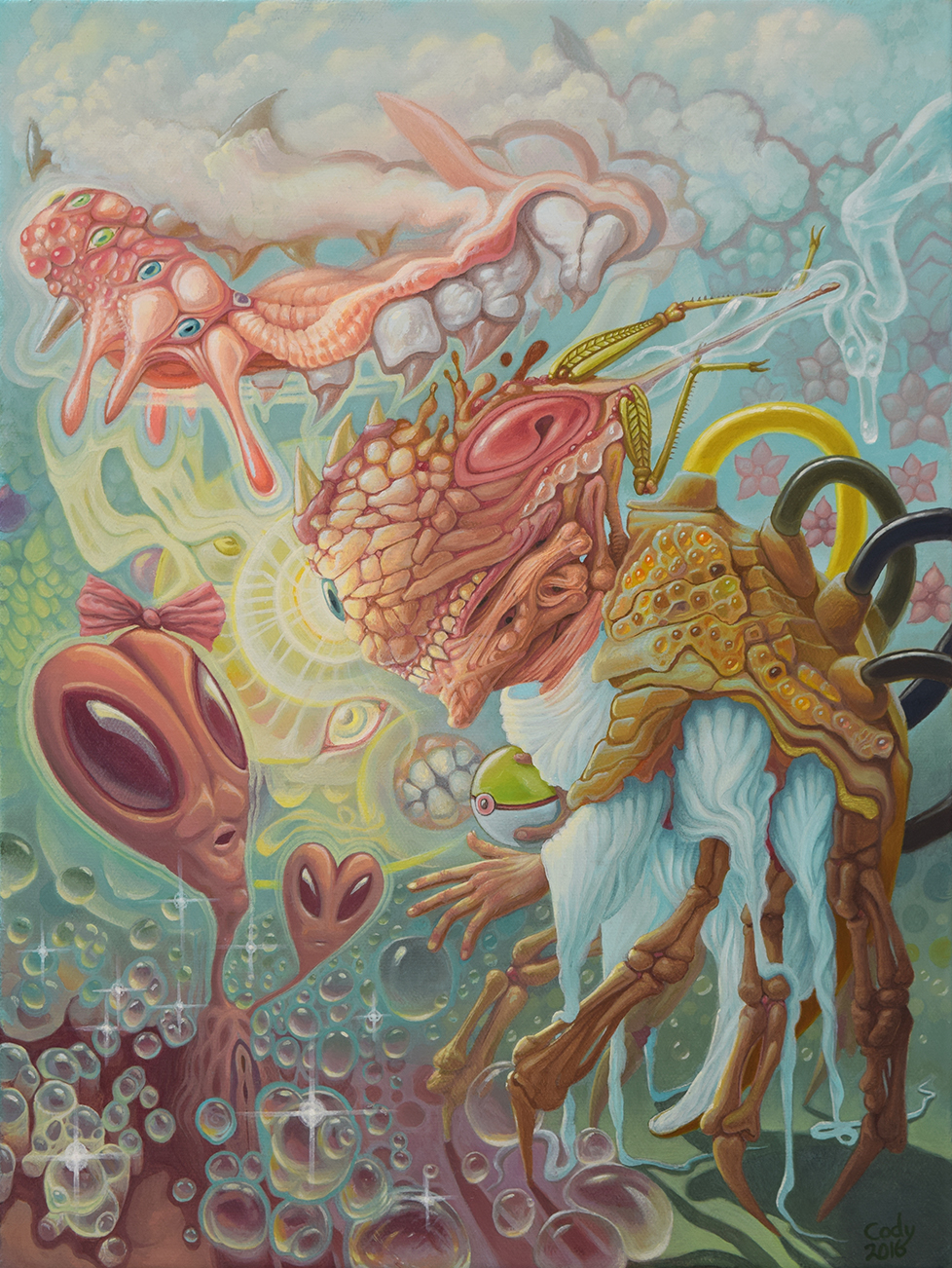