"The Rise from Hell" Pinhead.

Hello friends! My digital drawing, the hero of the film "The Rise from Hell" Pinhead. Pinhead is the main sensor in Hell."Rebellion from Hell" is certainly one of the most notable horror franchises of the 80s - 2000s. This film has everything that predetermined the franchise's popularity for the next 20 years: the darkest sides of sensuality and sex, sadism and masochism, pain and bliss, nightmares and dreams ... From the point of view of the plot, the film is a complete story that, in general, then, one could not continue, but the visual series of the picture was so unusual and perfect for the late 80's that the emergence of sequels was inevitable. For 8 parts, Pinhead turned into some otherworldly squadron on minor roles, the producers took the right decision, in my opinion, to "restart the franchise", starting all over again. That is, to resample the original "Rebellion from Hell", the benefit of the past 22 years is a sufficient time for a new revolution. For a long time as the director of the new film, Pascal Loezh, the author of the other-word "Martyrs", something close in spirit to the barker experiments on spirit and flesh, was named, but recently information was received about Leje's departure from the project. Is it really Barker will take up the auto-repair - do it so Michael Haneke and Takashi Simitsu! We will see! A book on the universe of the "Risen from Hell"! The name is Hellrasier: The Toll, and its action will unfold between the events of the story of Clive Barker "The Risen from Hell" and his novel "Scarlet Gospels." "Thirty years after Kirsti Singer ran away from the clutches of the Infernal priest, Pinhead, and lived fighting for every day she lived, her life could never be the same." Every few years she takes on a new name, creates a new identity and buys a new home She is a woman who runs from her past at any cost, so it becomes a huge surprise for her to receive by mail a letter addressed to a woman, from whom he ran half of his life. " The book is written by Mark Alan Miller, a friend of Clive Barker, who has already worked on several comic books on the Risen from Hell.

Collection: My new digital drawing - "The Rise from Hell" Pinhead. 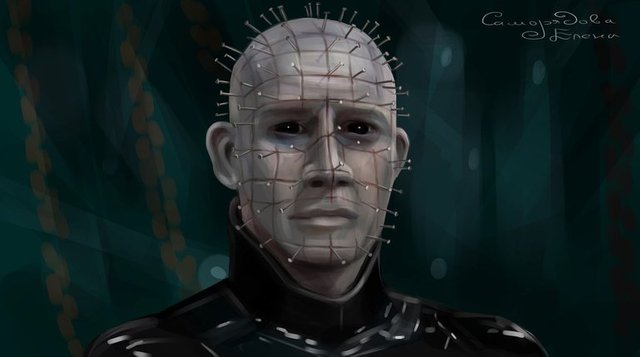